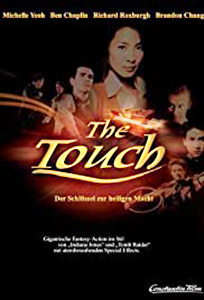 A family of circus acrobats have been the keepers of an ancient Buddhist scroll for over a thousand years. The scroll is a kind of map to a sharira*, the crystallized remains of a Buddhist monk. The sharira is said to “possess mystical powers that can transform mankind for the better. The monk in question lived over a thousand years ago and legend has it that there will come a time with the Heart of Dun Huang will come into the possession of the family, and with the aid of the scroll, lead them to the sharira. Uh, yeah. Im still confused over all of it. Yin (Michelle Yeo) is the head of the family of acrobats and doesnt believe in the power of the sharira. When Eric (Ben Chaplin), a man from her past, shows up with the Heart of Dun Huang, she still doesnt believe, but her brother, Tong (Brandon Chang), does. Tong and his girlfriend take both the Heart and the scroll and set off to find the secret of the sharira. On their trail is Karl (Richard Roxburg), a rather generic bad guy who sent Eric to find the Heart in the first place. Karl wants to possess the power of the sharira himself, but just what he wants to do with it, we never know (nor are we ever told just how the sharira can transform mankind). Karl and his thugs catch up with Tong and Eric and Yin try to rescue him and stop Karl from taking over the world or whatever he wants to do.

The Touch is an interesting film that is sadly marred by poor dialog and cheesy fight scenes. Yeo can fight; she and the other actors arent the problem; the choreography and cinematography are. The fights are just a mess with the film sped up for effect and just looks unnatural for lack of a better word. Thankfully there arent too many fight scenes. Another problem is the quality of the special effects, but that pales in comparison to the wretched fights. Towards the end, Yin, Eric, Tong and Karl do battle in this rather elaborate hall complete with rock pillars and fiery arrows. The setting is quite captivating but the computer-generated effects are lacking.

However, The Touch is one of the odd movies that one encounters and likes against their better judgment. I enjoyed the characters and their stories (or what little we are told about them), and despite the low-grade computer f/x, I thought the story and the settings (i.e. the above-mentioned hall along with a certain tree) quite spellbinding. Yeah, very Indiana Jones indeed  but thats not a bad thing. Oh and just why The Touch is called The Touch I have no idea. “The Touch is the damn circus that Yin runs/owns/works for, but heck, I could think of a whole lot better names to call the movie. Maybe Crystallized Buddhist Dude, or Ancient Scroll, Flying Family. Even Chinese Circus something, anything that made more sense. Okay, I can overlook the technical problems in The Touch enough to give it 4 stars. However I may be letting my personal interest in Buddhism and mythology get in the way, so as a general, average, everyday kind of movie, Id give it 3 stars. Check it out, but dont expect too much. You could be either mildly disappointed; or pleased at finding a new guilty pleasure.

*According to The Dictionary of Buddhism by Damien Keown, the sarira is “the relics (or material remains) of a Buddha or saint, normally enshrined in a stupa. (a stupa being religious monument which usually houses such relics or other sacred objects.) Couldnt resist doing a bit of digging around on the subject.